Analysts pay tribute to the visionary leader who transformed his region

“The UAE is almost unrecognisable from 20 years ago and has developed into a vibrant and dynamic place where individuals and businesses can flourish,” according to Scott Livermore, chief economist at research group Oxford Economics Middle East.

That is the legacy of Sheikh Khalifa bin Zayed Al Nahyan, the second president of the UAE and 16th ruler of Abu Dhabi, who died last Friday at the age of 73.

Sheikh Khalifa had led the UAE since 2004 and is credited with establishing the Emirates’ reputation as a centre for trade and commerce by diversifying its economy from oil and gas, coordinating inward investment and rolling out major development projects.

Wesley Schwalje, co-founder of consultancy Tahseen, described him as a “master statesman who played a particularly important role in the UAE’s economic diversification, increasing integration into the global economy, and strengthened federalism.”

The sheikh, Schwalje added, “consolidated and built on the tremendous legacy of his father by doubling down on investments in human capital and ingenuity to ensure the oil wealth of today is invested to benefit current and future generations.

“He oversaw the transition of a country almost wholly reliant on petroleum wealth into an emerging global hub for technology, aerospace and renewable energy, focused on sustainable development.”

Sheikh Khalifa was appointed deputy prime minister of Abu Dhabi in December 1973 and played a pivotal role in developing the emirate using its sizeable oil wealth. In January 1974, he was appointed the first chairman of the Abu Dhabi Executive Council. Under his leadership, the council implemented large-scale infrastructure programmes including the construction of housing, roads and utilities networks across the emirate.

In 1976, he oversaw the creation of the emirate’s sovereign wealth fund, Abu Dhabi Investment Authority, aimed at managing and reinvesting the emirate’s oil-based income streams to ensure financial sustainability. ADIA is the fourth largest sovereign wealth fund in the world, managing around $650 billion of assets and investing in sectors ranging from renewables and aerospace to technology.

Sheikh Khalifa became chairman of Abu Dhabi’s former Supreme Petroleum Council in the 1980s and was responsible for developing the upstream and downstream oil and gas industries. Over the years, he worked to encourage further diversification of the UAE’s economy away from hydrocarbons production and distribution – in 2020, the Supreme Petroleum Council was merged with the Supreme Council for Financial and Economic Affairs to reflect that shift.

Another plank of the emirate’s long-term strategy was to encourage private investment from citizens. In 1981, Sheikh Khalifa established the Abu Dhabi Department of Social Services and Commercial Buildings (known as Khalifa Committee), which provides loans to citizens for construction. In 1991, he created the Private Loans Authority to help citizens build residential and investment properties.

A Debt Settlement Fund set up by Sheikh Khalifa in December 2011 with an initial allocation of AED10 billion aims to help indebted Emiratis settle their loans. Banks write off half of the outstanding amount and the other half is bailed out by the government. Banks then collect the money from their customers and pass it back to the government. Beneficiaries of the fund are banned from borrowing any more money from banks in the UAE until their debt is settled.

A better life for his people

Sheikh Khalifa worked to expand the local workforce and build human capital. In 2012, he launched the Absher Initiative to promote the participation of Emirati citizens in the labour market through “Emiratisation”. Previously, UAE nationals were overemployed in the public sector and underemployed in the private sector – which was dominated by expatriates. Under the scheme, the government set targets for private companies to hire UAE nationals, to diversify the labour force.

The UAE continues to take steps to increase the capacity of its workforce and build a “knowledge economy”. Its cabinet designated 2015 the UAE’s Year of Innovation, setting out a programme of initiatives to highlight research and development taking place in the country and foster new skills and ideas. Sheikh Khalifa allocated AED300 billion to the Emirates Science, Technology and Innovation Higher Policy, intended to provide future generations with non-hydrocarbons-based career paths.

A pro-Western moderniser, Sheikh Khalifa was known for strengthening ties between the UAE and allies including the US and UK.

Raghu Mandagolathur, CEO, Marmore Mena Intelligence, said: “The UAE has maintained diplomatic ties with about 200 countries around the world and has strategic partnerships with multiple countries across the globe, thanks to his thoughtful leadership. All of these have helped in positioning the UAE as a successful global business hub.”

Sheikh Khalifa was until 2006 the chairman of the Abu Dhabi Fund for Development, responsible for overseeing the country’s international development aid programme. Since its inception in 1971, the ADFD has contributed to the development of 103 countries, according to the UAE’s state news agency WAM, through vital road, transport, water, airport construction, housing and other projects.

Its financing and investment volume exceeds AED150 billion, WAM says, and the fund has helped position the UAE as the world’s largest donor of development aid, with an active foreign policy and membership of regional and international communities.

In 2019, the ADFD launched the Abu Dhabi Exports Office to support national companies. It provides financing solutions and guarantees to importers of Emirati products and services, boosting the emirate’s profile on the global trade map by increasing national export rates and opening new markets for UAE businesses.

In 2017, Sheikh Khalifa launched the UAE’s first strategic plan, covering the period until 2021. It served as a roadmap for increasing the country’s competitiveness on the global stage, attracting more foreign investment and further diversifying its economy.

Livermore said: “An important legacy from an economic perspective is the optimism and positivity around growth prospects for the coming years and the opportunities available to investors and talent attracted to the UAE.”

To some, the most obvious example of Sheikh Khalifa’s legacy is the world’s tallest building, Burj Khalifa in Dubai, which he funded and which is named after him.

However, among those highlighting his “visionary leadership” is Massimo Falcioni, chief executive of the UAE’s export credit agency Etihad Credit Insurance. He said: “The great legacy of Sheikh Khalifa bin Zayed Al Nahyan in achieving socioeconomic progress in domestic, regional and international stages will remain an exemplary success model for the global political and business community.

“His unshakeable belief and trust in progress through unrestricted trade brought exceptional growth and prosperity to this country. He has been a tremendous source of inspiration and guidance for the establishment of ECI … and we’ll forever be indebted to his visionary leadership and direction.”

Zak Hydari, chairman, Rasmala Holdings, also told AGBI: “His Highness Sheikh Khalifa bin Zayed Al Nahyan presided over the most significant transformation of the UAE economy since independence. During his presidency, the UAE established itself as a global tourist destination and leading business and financial centre but perhaps his greatest legacy is the continuity of strong and stable leadership and leaving us safe in the knowledge that the future of the UAE is in capable hands.”

The UAE has begun an official mourning period of 40 days, and flags will fly at half-mast. Sheikh Khalifa is survived by his wife Sheikha Shamsa bint Suhail Al Mazrouei, and his eight children. 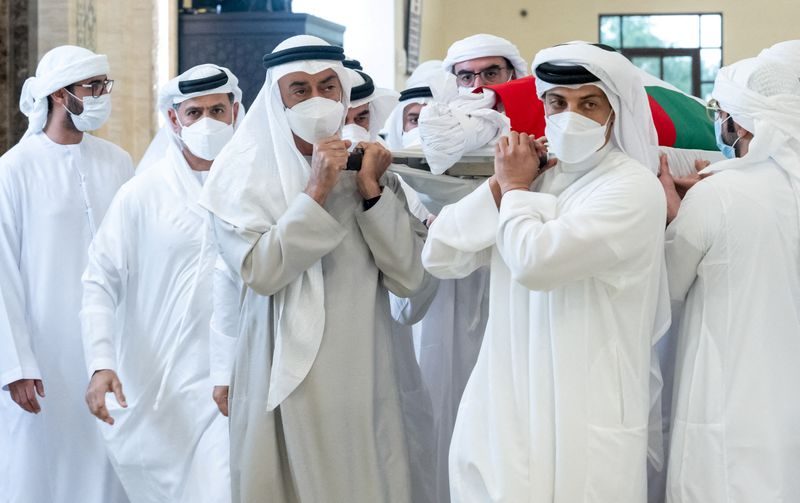