A little-known fact: the sand used in the concrete to build Dubai’s 829-metre tall Burj Khalifa was imported from Australia.

While water scarcity generates much concern, sand shortages are only beginning to receive attention – especially in the desert metropolises of the Gulf.

A report in April by the United Nations Environment Programme (UNEP) highlighted that sand is not an endlessly available commodity, and the construction sector needs to look at how it can become more sustainable.

From stadiums in Doha and mega projects in Saudi Arabia to the ever-growing list of skyscrapers and artificial islands in the UAE, sand is a big issue for the Gulf region.

Around 50 billion tons of it – enough to build a wall 27 metres deep and 27 metres high around planet Earth – is used every year, in everything from the production of glass to concrete blocks.

This volume makes sand the second most used resource worldwide after water.

But there are signs that his voice is beginning to be heard.

“Demand for sand is driven by population growth, economic growth, the shift from rural areas to urban areas, and the ensuing development for infrastructure” he told AGBI.

“This report recommends ways to avert a sand crisis. Let’s not wait to have a crisis until we take it seriously.”

“I’m trying to fundraise for it because you can’t open a centre just for one year and then you close it.

“The Middle East is usually generous when it comes to these kinds of things. It would be to their advantage because, even though they’ve got a lot of desert sand they don’t have a lot of river sand to use for infrastructures.

“They need to realise they’re vulnerable and dependent. At the moment, it’s under the radar.”

A lack of understanding of sand shortages in the Arab world seems understandable until you realise the problem is desert sand is the wrong sort of sand for use in concrete and construction.

It’s too smooth and beach sand contains too much salt. The sand needed to build the world’s tallest tower in Dubai, therefore, had to be imported.

Dr John Orr, a lecturer in concrete structures at the Civil Engineering Building at the University of Cambridge in the UK, said: “We need to learn to use less concrete to achieve the same performance standards for new buildings.

“Multiple studies have shown that it’s possible to make 50 percent savings in concrete use if we think about the design.”

There’s certainly a dichotomy between Gulf state plans to decarbonise sectors to meet net zero targets by 2050 and the continuation of building using imported sand for concrete.

“In its current form, construction is unlikely to be compatible with zero carbon ambitions. Designers must only use the concrete they need, and no more,” Orr said.

UNEP’s Peduzzi said research in Belgium found that, if the European country continues on its current trajectory of usage, it would have exercised all its sand resources within eight decades.

“While 80 years seems a long way off we don’t want to ever have no sand left because it’s needed to support the ecosystem,” he said, comparing overuse the overfishing of our seas and the cutting down of trees.

He added that governments in the Gulf region should stop building so many “vanity projects” and focus more on vital infrastructure.

“We cannot afford to show off anymore,” he said. “We must focus on sustainable development such as housing, hospitals and schools. If we waste resources on luxuries, we’ll miss the [net zero] target.”

AGBI asked several top construction contractors in the Middle East to comment on any impending sand crisis, and they all declined.

However, Ian Riley, CEO at UK-based World Cement Association, downplayed the impact of sand on the construction process.

“There is a problem with regulation of active sand extraction in some countries,” Riley said.

“UNEP’s definition of sand resources includes quarried stone and artificial sand, where the issues are quite different from active sand.

“Concrete also represents a small portion of the cost of buildings (typically two percent) so higher concrete prices will increase building costs, but the impact is small.”

At the Venice Architecture Biennale 2021, the UAE Pavilion focused on alternative types of concrete.

Wael Al Awar, principal architect at Dubai-based firm Waiwai, was involved in the creation of the UAE Pavilion and accepted the Golden Lion Award for Best National Participation, beating 60 other global contenders.

In an interview with Designboom magazine, he said: “Architects of the 20th century didn’t seem to care.

“The attitude was, ‘I am a designer and climate change is part of environmental science or something that should be solved by others’.

“We can’t continue using materials when we know the impact on the environment.”

Peduzzi prefers the idea of responsible design to investigating whether Arab desert sand can be altered to make it viable for use in local construction.

“Some people have tried adding chemicals,” he said. “It’s possible, but not ideal. Desert countries may still need to import sand.”

A funded research centre could yet discover the true implications of using sand in construction. 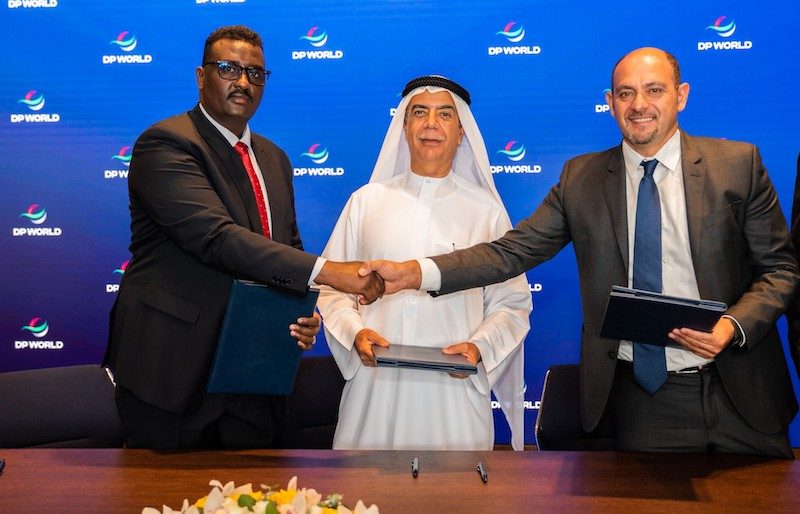 Dubai-owned DP World and Somalia’s Puntland government have signed a construction agreement for expansion and upgrade work at the Port of Bosaso. The 12-month project, which is expected to start in early 2023, will include the development of a 150-metre quay and repairs to the current 215-metre quay, DP World said in a statement. Other […]